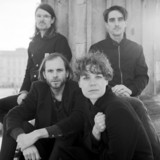 ,A monumental experience' - NBHAP ,Reminiscent of Portishead’s intensity. Digital pop that stands out.' - CLASH ,A satanic Sigur Rós' - GIGWISE ,The invention of a new German way to sing in English' - ZEIT ONLINE Imagine Portishead formed in Berlin today. Josef Beuys comes along, shreds the band with a coarse wire brush, and exhibits them in a dark, 100 foot high silo for the production of artificial icebergs. The resulting Gesamtkunstwerk may well be a close approximation of Hope. The first foreigners to fall in love with this burstingly emotional monster of a band were ALGIERS and IDLES, with whom the band toured extensively. („Hope are mesmeric live. Beautiful music by beautiful people.“ - Joe Talbot, IDLES). Subsequently, the press at Eurosonic Festival celebrated Hope as the new, avant-garde pop miracle („Ballet mixes with Post-Punk better than you think“ - buzz.ie, „a monumental experience“ - NBHAP.com) Their self-titled debut album was recorded by Olaf Opal (The Notwist) in the remains of an abandoned lung sanatorium to capture inner destruction and coldness. It has what it takes to become a timeless classic. Songs like RAW, CELL, KINGDOM and DROP YOUR KNIVES radiate more dark and dystopic energy than all seasons of Black Mirror combined. They are songs that originated in the demystified, gentrified, and art-free space known as „Berlin“.