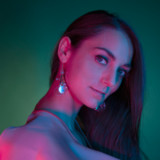 BOGGIE is one of the top talents and internationally most renowned singers of the Hungarian music scene. Her first album titled Boggie (2013) was No.3 on the Billboard chart in 2014 February. Her videoclip titled "Parfum" gained a really significant international interest, reaching 30 million views. She already gave concerts in New York, Paris, Madrid, Brussels, Phoenix, Munich, Frankfurt, Lille, Marseille and Bilbao. In the Viennese Opera she performed at a concert titled "Pop meets Opera" that featured Placido Domingo too. In 2015 she won the Hungarian national competition titled "A Dal 2015". As a result of that she represented Hungary at the 2015 Eurovision Song Contest.

In 2016 she took a brief break from her music career due to giving birth to her daughter, but now she’s back with a new self-published, trilingual album with songs in Hungarian, French and English. The album is a mixture of electronic and acoustic sounds, it even has some dancehall and r’n’b elements and a huge influence from French pop music. Boggie is solely responsible for all the songwriting on the album, contrary to her previous albums of jointly written songs. The birth of her daughter has admittedly changed her songwriting, she sounds much more confident and as a result, the new album is excitingly diverse.