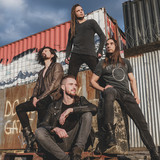 With two critically acclaimed albums under their belt, Neonfly have been storming festival main stages, and touring as the main support band for some of Rock’s biggest names, including Alice Cooper, Dragonforce, Anvil, Gamma Ray & Magnum, since 2011. Their wildly dynamic live performances combining ferocious musicianship, a frenetically energetic frontman, and a fire-breathing guitarist have earned them a growing reputation as a compelling musical & visual live draw. In May 2019, the band dropped their new single ‘This World Is Burning’ as a sample of a defiant new musical direction together with a staggeringly successful crowdfunding campaign that reached 121% of their original goal, and enabled the band to hire Grammy Award nominated producer Romesh Dodangoda (Motörhead, Bring Me The Horizon, etc.) to record their third full-length album, released on June 18th, 2021 via Noble Demon Records. In anticipation of the release, Neonfly released a cover of the 1970’s Shocking Blue classic ‘Venus’ in a creative collaboration with renowned Instagram star and fetish goddess, Dani Divine, and joined forced with Soilwork's Björn ‘Speed’ Strid on the title track of the new album ‘The Future, Tonight’, a deeply powerful piece of music with a compelling message, dealing with the serious issues of mental health, depression and addiction.