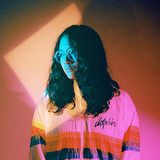 Melina Duterte is a master of voice: Hers are dream pop songs that hint at a universe of her own creation. Recording as Jay Som since 2015, Duterte’s world of shy, swirling intimacies always contains a disarming ease, a sky-bent sparkle and a grounding indie-rock humility. In an era of burnout, the title track of her 2017 breakout, Everybody Works, remains a balm and an anthem. In November of 2017, seeking a new environment, Duterte left her home of the Bay Area for Los Angeles. Reckoning with the relative instability of musicianhood, Duterte turned inward, tuning ever deeper into her own emotions and desires as a way of staying centered through huge changes. The striking clarity of her new music reflects that shift. After months of poring over pools of demos, Duterte, now 25, essentially started over. She wrote most of her brilliant new album, Anak Ko—pronounced Anuhk-Ko—in a burst during a self-imposed week-long solo retreat to Joshua Tree. The title Anak Ko is the Tagalog phrase for “my child.” It was inspired by an unassuming text message from Duterte’s mother, who has always addressed her as such: Hi anak ko, I love you anak ko. “It’s an endearing thing to say, it feels comfortable,” Duterte reflects, likening the process of creating and releasing an album, too, to “birthing a child.” That sense of care charges Anak Ko, as does another concept Duterte has found herself circling back to: the importance of patience and kindness.