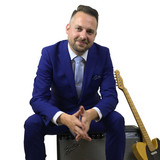 Paul Filek is a Canadian Singer Songwriter from Kamloops, BC who's released three albums and one Ep since 2006. As well as being a Top 40 Canadian Idol Finalist in 2007 (Top 20 Male), Peoples Choice Award (BC Interior Music Awards 2008), and cracking the Top 100 charts in 2011 (Falling For You #85 nation wide - Mediabase Main AC 7/30/2011) Paul has also had the pleasure of sharing the stage with many great artists including INXS, CARLY RAE JEPSEN, ZIGGY MARLY, STYX, TROOPER, JULLY BLACK, CORB LUND and many more. In 2019 you can Find Paul on a nightly bases performing at some of Vancouver’s Hottest and most vibrant lounges. If he is not on stage with his band you will find him making his own ‘live off the floor’. Using a Looper Pedal, he produces a one man band to accompany him inspired only by his guitar, vocals, and imagination. Covering a wide range of music you can hear him playing Top 40/Alt Rock/Pop. www.paulfilek.com for the latest.