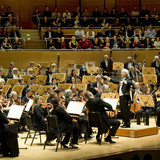 Pacific Symphony, led by Music Director Carl St.Clair for the last 28 years, has been the resident orchestra of the Renée and Henry Segerstrom Concert Hall for over a decade. Currently in its 39th season, the Symphony is the largest orchestra formed in the U.S. in the last 50 years and is recognized as an outstanding ensemble making strides on both the national and international scene, as well as in its own community of Orange County, California. In April 2018, Pacific Symphony will make its debut at Carnegie Hall as one of two orchestras invited to perform for a yearlong celebration of composer Philip Glass' 80th birthday. Presenting more than 100 concerts and events a year and a rich array of education and community engagement programs, the Symphony reaches more than 300,000 residents—from school children to senior citizens.