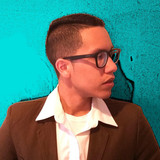 Yuey (pronounced: Yoo/eee) is a trained pianist turned music producer. Born and raised in Central New Jersey, he has been making music since 2009. After rocking his school's talent shows with powerful piano performances, he decided to practice writing his own music. In order to grow beyond the basics, he had to study music theory and learn about world music cultures. Now he uses his deep understanding of music to craft a wide range of sonic experiences including hip hop beats, film scores and commercial music. His first big break was composing the soundtrack to the indie videogame "Recurve". His current interests include alternative hip-hop and electroacoustic RnB. Expect a debut album soon! The instrumental tracks he posted here are are royalty free. They can be used in any project and remixed into your own songs. Best of all, you can download them right now FOR FREE ( https://aagamamusic.com ) If you use his music in your project please share it on social media with the hashtag #DoMoreMusic | 🌊🌊🌊🌊🌊