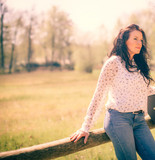 ESTHER VAN KOMMER   ES (Esther van Kommer) a natural born singer/songwriter from the Netherlands who received a golden award in the USA for “Female Vocalist of the Year” (International Singer Songwriter Association - ISSA Awards 2019). Influenced and inspired by singers like Emmylou Harris, Linda Ronstadt, Allison Krauss, Johhny Logan, Vince Gill, Eva Cassidy, Mary Black, Dolly Parton.   After an intense period of preparation, ES presented on 11-11-2018 her debute album MO. No less than 9 new written songs, and a number of beautiful classic, songs, that will touch and move you, are audible on this album. With a mixture of one of her greatest passions, Country, Americana and influences of pop and folk she created an unique atmosphere.   At the moment (2020/2021) she is recording her new selfwritten songs at Neo Music for a new album. She released her first single from the upcoming album (march 2020) ‘Little Boy' Little Boy In August 2020 she released the single “We Are Still Apart” October 24 2020 ‘Beautiful Light’ and in November 2020 ‘When the Light Goes Out’. The first single of 2021 came out on March 31. a song she wrote for her best friend Mo. ‘When the Birds Start to Sing’.   www.esmusic.nl MO