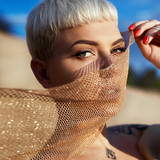 Critically acclaimed artist, Jazzu, has become one of the most influential artists in the Lithuanian music industry today. Her innovative works are recognized worldwide and continue to sweep the nation with each new release. In 2005, Jazzu formed an electronic music duo with Leon Somov. “Leon Somov & Jazzu” released five albums and won various music industry awards, including the Best Baltic Act MTV award. The group went on hiatus in 2017, allowing Jazzu to start her solo career. During this time, she worked with the internationally acclaimed producer Anthony Marshall in London and performed with the “Koop.” In 2019, Jazzu came back to the big stage with a new image, presenting her fans with her latest masterpiece “Wild,” and the award-winning music video in a Spanish desert. Jazzu collaborated with various artists, including producer Jonas Nainys-Jovani. Their song “Keep It To Myself” became an international success placing the piece at number one of the Polish trendsetting music station “RMF FM” charts. In 2019, Jazzu staged a national tour “Welcome” with performances in her native country’s largest venues, attracting tens of thousands of fans. During the time, she performed with both Lithuanian musicians and British musicians who have performed with “Grammy” nominated performer Craig David. 2019 M.A.M.A. music awards were hugely successful for Jazzu with victories in Best Album, Best Music Video, and Best Pop Artist.