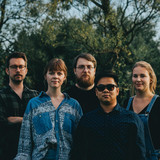 Napaea is an Austrian 5-piece Folk-Pop band. Using a broad range of dynamics, NAPAEA tell their listeners about wanderlust and growing up in small villages. NAPAEA combine Indiefolk with nautical tunes, Singer-Songwriter, and a touch of Punkrock, and present this crossover-beast with an extraordinary selection of instruments: guit, bass, drums, concertina, fiddle, and blues harps promise excitement, when NAPAEA take their crowd on a trip through Irish pubs and at sea. Since NAPAEA formed in 2015, they've already played dozens of national as well as international shows and gained regular radio airplay. Their honest and elevating performances sufficed to put NAPAEA on the lineup of big festivals and get support slots for acts like Tim Vantol, Wallis Birdand PJ Bondamong others. With their debut album From The City Into The Lake, NAPAEA have created an ode to life and the relentless search for the intangible. Honest and epic, the sound of the Austrian Folkband calls to mind cozy pictures, carried by down-to-earthness and joy and portrays with “From the City Into the Lake” a satisfying answer to the restlessness of wandering.