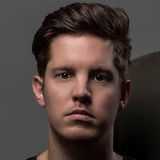 Lowie van Leeuwen was born on 18-05-’85 in the Hoek van Holland (near Rotterdam). It all began for him at a young age. His love for music developed mostly because of the inspiration he got from his father. He learned how to play piano at a very young age and proved to be more then talented in playing all types of music. With the 90’s passing by he became more interested in the harder sides of house music. His musical background gave him an advantage when he started his producing and dj’ing career. Soon he was learning how to mix records and how to make his own tracks and dj Glowiej was born. His first productions released under the name Glowiej were a major hit and the manager of Shortcut records offered him a contract to help him towards his future and more excellent releases. In 2008 Glowiej released “I Got You”, a cooperation with dj’s Josh & Wesz which made it to the top of the bestseller charts in the Netherlands and abroad. After this success he changed his stage name to Low-E and now he was ready for the real deal. As Low-E he scored numerous hits like I’ve Lost You, Harde Rag, Vendetta, WTF and many more. With his melodic beats combined with some serious rawness he knows how to set fire to the dancefloor! Now back the fuck up and make room for DJ Low-E because he is ready for the future of hardstyle!