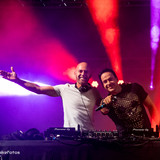 Darius & Finlay is one of Austria`s most well known DJ & EDM projects! Beside gigs in Austria, Germany, Spain, Poland and Switzerland, Darius & Finlay were support-act for David Guetta and Avicii in Vienna, rocked the stage together with Martin Garrix and Alan Walker at the ski-opening Schladming and also accompanied Steve Aoki at his two shows in Austria. With over 120 million Youtube-Views, over 140 million Spotify Streams, the win of the Amadeus Music Award, Austria`s most important music-award, and numerous nominations, as well as 13 placements in the German Top 100 sales-charts, 29 placements in the Austria Top 75 sales-charts and airplay-hits like “Close My Eyes”, “Possible” or “Not for Sale”, the last two years have been the most successful in the now more than 10-year lasting career! Darius & Finlay`s single “Clothes Off (Nanana)” from 2020, a cover-version of Jermaine Steward`s 80`s classic, reached more than 8M streams on Spotify and was a big success in UK, Scotland, Norway, South America as well in other countries. New release on 12th of March - "Water" together with Ty Dolla $ign & Karra! Since last year Darius & Finlay also follow his passion for Hard & Melodic Big Room sound. "Superbeast" will be released on the 9th of April on Maxximize/Spinnin' and will be the great start in a long series of many tracks & collabs.