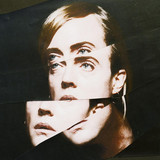 Robot is Berlin based British producer/musician Robbie Moore. ‘Wedding Address’ (Sep 2020) will be his 3rd Robot album, following 2017’s 33.(3) and Vedgdbol. In 2014 he created Impression Recordings in Berlin, designed and built from scratch with a nod to the great studios of the 50s and 60s, and housing his enviable collection of musical toys. His clients in Berlin have included L.A. Salami, Peaches, Jesper Munk, Lary, Gemma Ray, Cro, Namika, Donny Benét, Balagan, and many others. He also produces films of his building projects, and hosts a studio live stream twice a week, all of which feature on his YouTube channel. Growing up in and around London, and inspired by a Beach Boys LP and Eagles cassette left behind by a lodger, he started writing music at age 7 after discovering his mother’s tape-to-tape function. He built his first studio in London at the age of 21, using recycled materials he found during skip raids across London, featured in Sound on Sound. In the early 2000s he created 17-piece psychedelic band The Mores, which in 2002 became the first band to play many of London’s churches including Shoreditch and St. Giles, both now established venues. In 2005 he took over Trevor Horn’s old SARM East studios, quickly turning it into one of East London’s most desirable studios, with countless sessions there with the likes of Florence + The Machine, No Picasso and Whirlwind Heat. In 2006 he joined Alan Wass/Lefthand as bassist, touring UK with Babyshambles.