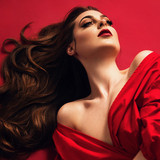 ROYAL blends dynamic and emotional vocals with a rich and moody production to create a distinct indie-pop flavour and a bold and empowering listening experience. The British Columbia-based artist debuted as ROYAL in 2014 with her collaboration of “City Lights” with electronica artist Conro, gaining over six million streams on Spotify. Since then, ROYAL has taken bold steps to redefine her sound and style by creating a vocal presence and an image that lives and breathes from her emotions. In 2016, she teamed up with acclaimed artist and producer Luca Fogale to create and record the hauntingly cinematic Heart of Shadows album. The album’s first single “Vessel” received the 2020 Leo Award for Best Music Video, which stars Riverdale’s Tiera Skovbye and Jordan Connor. ROYAL has placed songs on Netflix, CBC Television, Showcase and Hallmark. She has toured across Canada and Australia and is set to open for Vérité in 2021 in Vancouver, BC following the release of her new music in early 2021.