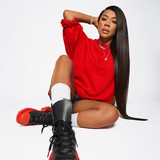 Known for her raspy soprano voice and intensely expressive performance style, Keyshia Cole was one of most successful R&B singer/songwriters to emerge in the 2000s. She worked her way up the industry ladder diligently yet quickly, making her major-label debut in 2004 at age 21. Born and raised on the tough streets of Oakland, Cole aspired from an early age to make music her life, so much so that she started working the angles while still a preteen, including recording with fellow Bay Area resident MC Hammer. Her singing aspirations began to take flight during the early 2000s, when she appeared on Messy Marv's "Nubian Queen" remix and the Me & Mrs. Jones soundtrack. These gigs led to a career highlighted by several Grammy nominations and platinum RIAA certifications. Following her early Bay Area opportunities, Cole began contemplating a leap for the big time: Los Angeles. So when she discovered that her then-boyfriend had cheated on her, she packed her bags and never looked back. In Los Angeles she quickly impressed many with her ability and thus made plenty of industry contacts, among them A&M Records president Ron Fair, who signed her to a solo deal. And to work she went on her debut album, The Way It Is, co-writing a number of songs and working alongside a number of hitmakers: the trendiest talent in hip-hop at the time, Kanye West, collaborated with her on "I Changed My Mind," the album's lead single, and other big-name collaborators included 112 group member DaRon, Murder Inc. rapper Chink Santana, and veteran producer E-Poppi. Plus, she got the chance to collaborate with one of her inspirations, Eve, for a song on the Barbershop 2 soundtrack, "Never," which was released as a single in early 2004. When Interscope/Geffen/A&M released The Way It Is in 2005, Cole was positioned alongside Brandy, Monica, and Beyoncé, yet Cole had a street edge over her peers. Having grown up in Oakland and lived there most of her young life, she knew life wasn't all glitter and gold, and applied that inner-city viewpoint to her work. Two singles released from The Way It Is, "I Should Have Cheated" and "Love," reached the Top Ten of the R&B chart, and the album eventually sold a million copies in the U.S. The wait for her second album, 2007's Just Like You, was broken up by memorable appearances on Diddy's Press Play ("Last Night") and R. Kelly's Double Up ("Best Friend"). Just Like You was a smash, topping the R&B albums chart and missing the top of the Billboard 200 by one spot. Its release coincided with a BET reality series of the same name. The album and its two biggest singles, "Let It Go" and "Heaven Sent," were nominated for a combined total of four Grammy Awards. Just after season two of her BET show began, in late 2008, Cole issued her third album, the relatively upbeat and pop-oriented A Different Me. As with her previous album, it narrowly missed the top of the Billboard 200. Three of its singles added to her stack of Top Ten R&B/hip-hop hits. In 2010, the same year in which she gave birth to her and professional basketball player Daniel Gibson's son, she released her fourth set, Calling All Hearts, which peaked at number nine. Woman to Woman, directed at her fans -- and her first album away from Fair, who left his position at Geffen -- followed in 2012 and was her fifth straight Top Ten album. Cole then shifted to Interscope for Point of No Return, released in 2014. Two of the hottest producers at the time, DJ Mustard and Mike WiLL Made-It, contributed to the album, as did Cole inspiration Faith Evans. Free from Interscope, Cole moved to another major label, Epic, for the 2017 album 11:11 Reset, preceded by a handful of ballads, including "You." ~ Jason Birchmeier & Andy Kellman