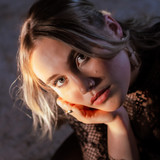 Emilia Tarrant first made a splash in 2019 with acoustic singles ‘If You Want Love’ and ‘Black & White’, establishing this young musician as Topshop’s favourite new artist, with premiere features also found in Wonderland and Atwood Magazine. Tarrant also charted at #16 on the Shazam Chart with the debut ‘If You Want Love’ (produced by Coldplay-credited Danton Supple), after featuring on a key episode on ITV’s Love Island.  Tarrant returned to the studio with producer Luke Potashnick (Gabrielle Aplin) to explore her distinctively classic pop sound further. One such product of this earnest period of songwriting is ‘Honeymoon Phase’; a true coming-of-age ballad which navigates all the highs and lows of a new relationship. The song was credited by the likes of Wonderland, Mahogany, CLOUT, POPMUZIK, The Music Enthusiast, Up Next Sessions and more. It has recently been featured on this year’s series of Love Island, reaching #23 on the Global Singer Songwriter Shazam charts. ‘Here You Are, Again’ also caught the attention of Love Island editors, closing a recent episode. ‘If Love Is A Gun’ however, allowed Tarrant to explore a more uptempo production, catching the attention of Spotify editors and landing the song a place on Spotify’s ‘New Music Friday UK’ playlist.   Emilia recently supported Billie Marten at The Joiners, Southampton, was booked for cancelled Glastonbury 2020, played at The Houses Of Parliament for UK Music CIC Industry awards, The Ned, Groucho & White City House.