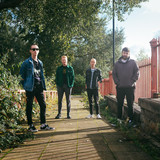 Fierce garage-rock four piece from the crusty depths of Newcastle upon Tyne. The off-kilter mix of unruly guitar, pummelling rhythms, warbling synth and witty wordplay has left audiences gagging for more up and down the fraught, shivering isles of the UK. Swine Tax is the creative voice of Vince (lead vox and guitar), TK (bass), Charlie (drums) and Euan (synth and guitar). After performing alongside bands such as black midi, BODEGA, and The Futureheads (to name but a few), the foursomes’ presence was requested in the form of a European tour, culminating at MOMO fest in Rotterdam.