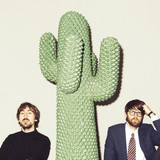 Hockney is an emerging indie-pop duo from Oslo, Norway, consisting of Sigurd Fandango and Vegard Setrom. On their debut album, "Vacation", Hockney has partnered with Sean O' Hagan (Stereolab, The High Llamas) to write string arrangements for this escapist pop gem. With Hockney's own natural flair for lovely harmonies and catchy melodies, it has resulted in a playful pop song which is a perfect soundtrack for the summer. The strings were recorded by Andy Ramsay of Stereolab in Press Play Studios in London. The single "Twenty-Two" was listed on Norwegian public radio NRK. and compared to both Kings of Convenience and The Beach Boys. Vacation was heralded as one of the best Norwegian pop albums of 2018. The first single of their sophomore album, "Cellophane" will be released in the autumn of 2019.