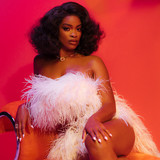 A forthright lyricist and understated vocalist who has singled out the likes of Minnie Riperton and Mýa as two of her many inspirations, Ari Lennox has been the one-artist R&B contingent of J. Cole's Dreamville roster since 2015. The singer and songwriter made her commercial Dreamville debut in 2016 with the Pho EP and followed up in 2019 with her first album, Shea Butter Baby, which hit the Billboard 200 chart at number 104. Originally from Washington, D.C., Ari Lennox (born Courtney Shanade Salter) made her first moves during the first half of the 2010s with the Five Finger Discount mixtape, the Ariography EP, and tracks such as "Bound," all of which she uploaded from 2012 through 2014. In 2015, she began an alliance with J. Cole's Interscope-affiliated Dreamville label through a featured appearance on Omen's "Sweat It Out" and a showcase on the Revenge of the Dreamers II compilation standout "Backseat." The next October, Dreamville issued Lennox's Pho, an EP that entered Billboard's R&B/hip-hop chart at number 40, led by the Hollywood JB collaboration "Night Drive." She contributed background vocals to Cole's chart-topping 4 Your Eyez Only and opened for Cole during the rapper's extensive 2017 tour in support of the album. Throughout 2018, Lennox was featured on cuts by labelmates Bas and Masego, released a handful of stray tracks, and appeared beside Cole on the Mike WiLL Made-It-produced Creed II soundtrack. That song, "Shea Butter Baby," became the title track of Lennox's first album. Released in May 2019, Shea Butter Baby reached number 104 on the Billboard 200. Around the same time, "Shea Butter Baby" itself registered on the Adult R&B Songs chart. A companion album, Shea Butter Baby (Remix EP), arrived in March 2020. ~ Andy Kellman, Rovi