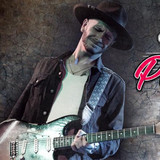 Playing a mix of foot stomping blues grooves and searing lead guitar, Grant Pritchard brings a modern twist to a classic sound. Touring as support for seasoned blues-rock performers such as Ryan McGarvey, Eric Sardinas and Chantel McGregor - Grant Pritchard has cut his teeth with some of the best! With the release of the “Burning With A Blue Flame” EP, live performances incorporate earthy, blues guitar soaked original material. “The whole gamut of blues is covered by this talented trio and if a band can break a reviewer’s pen as he’s tapping along then they really must have something going for them.” - Down The Front Media. ​