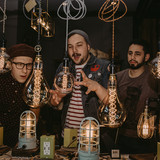 Somewhere between just enough and way too much, Discord Theory combines Progressive Rock and Pop-punk while lyrically provoking thought, love, and hope. Emanating from the palm trees and the sunshine of Tampa, Florida, the members of Discord Theory first came together in 2017. It wasn’t long before they were already working on their debut EP, ALAS, which they balanced with as many live performances as they could cram in. Along the way, they secured opening sets for such noteworthy acts as Bayside, Hail The Sun, and Strawberry Girls. Currently the band is making is actively writing and recording their debut full-length album with Lee Dyess, who has produced albums for groups such as Mayday Parade, From First To Last, and Against Me! On their downtime, you can catch the band supporting the local arts, small businesses, and helping the community grow. Their latest single "Breaking The Wheel" is out now on all your favorite noisemakers.   Members: Luis Giler - Vocals/Guitar Steven Card - Guitar/Vocals Anthony Rodrigues - Bass/Keys