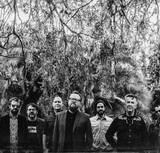 Halfway is a seven piece band based in Brisbane, Australia. Halfway formed in 2000 , three of the original members – John Busby, Elwin Hawtin and Chris Dale originally hail from Rockhampton, Central Queensland. After moving to Brisbane and recruiting like-minded Ben Johnson (bass), they were shortly joined by Dublin born brothers Noel Fitzpatrick (pedal steel) and Liam Fitzpatrick (banjo/mandolin). The finishing touches to the lineup were added with the inclusion of ex-Go-Between John Willsteed (guitar) & Luke Peacock ‘The Bird’ (keys/guitar) in 2010. Current album Rainlover released August 10, 2018 was co-produced by Nashville art rock recording legend Mark Nevers. The album is packed with tracks that are broadly universal yet remain devastatingly personal; the album is a story of big dreams, conflict, addiction and disappointment with the narrative using central characters which are real people from Rockhampton in the 60’s, 70s, 80s.   HALFWAY have previously recorded with renowned producers Robert Forster (The Go- Betweens), Peter Jesperson (The Replacements) and Mark Nevers (Lambchop). Which comes to no surprise that previous albums ‘Any Old Love’ (2014) and ‘The Golden Halfway Record’ (2016) both received 5 star reviews in national press, an AIR award for Country album of the year (2015) and received a nomination for an APRA award and won three QMA awards including Song of the year in 2015 for the song Dulcify from the album ‘Any Old Love’.