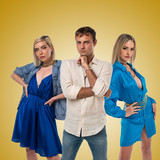 Satirical Milanese dance-pop trio Il Pagante ("The Payer") began life in 2010 as a fake Facebook profile devoted to poking fun at local youth culture and attitudes. The character of Johnny il Pagante, created by students Guglielmo Panzera and Alfredo Tomasi, soon took on a life of his own, with many people believing he was real and sharing his hedonistic exploits on social media. The growing popularity of the page convinced its creators to try something new. Recruiting beatmakers @Merk & Kremont, rapper Edoardo Cremona (aka Eddy Veerus), and singers Federica Napoli and Roberta Branchini, they created a series of fake music videos starring Johnny. The page's popularity snowballed, with the videos accruing millions of views, and eventually the musical project became a viable concern in its own right, the trio performing live all over Italy to packed houses. Panzera and Tomasi continued to take a backroom role, writing the lyrics together with Cremona. The project's satirical nature and image, with a laddish frontman and two blonde bombshell singers, made it somewhat analogous to Die Antwoord. Their sound was a smorgasbord of EDM styles, with elements of trance, Italo house, and reggaeton, and deliberately ridiculous overuse of AutoTune. In 2014 Il Pagante signed to spotify:search:label%3A%22Warner+Music%22 and released "Faccio After," the first in a series of successful singles. Their debut album, Entro in Pass, was released in 2016, peaking at number three in the Italian charts. ~ John D. Buchanan, Rovi