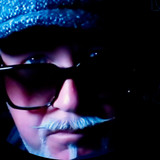 Tash Hagz is the performance name for Birmingham UK based musician, Mike Shields. A multi-instrumentalist and seasoned singer-songwriter, his spare time is spent in his home studio crafting retro-rock music that leans towards a psychedelic punk vibe. Distracted in his mid-20s with real-life he succumbed to a nine to five non-musical career. But a true calling never ceases and before long he found himself being woken up at night by fresh new melodies pleading with him to give them life. He surrendered to their calling, setting up his own recording studio and developing his production skills. Influenced by Bob Dylan, The Beatles and the psychedelic sounds of the late 60s, Shields has amassed box sets worth of songs over the years, each said to be an honest, organic track coloured with catchy melodic hooks. In 2020 he released two official tracks, Images Of Imogen and Mankind & Destiny. Both garnered rave reviews from critics with the tracks being described as "an indie rock classic in the making" (Images Of Imogen) and "Stunning. An absolute must hear" (Mankind & Destiny). His latest release, ‘Dependent On’ dropped on 21 May 2021 and he was described by Melody Maker as making "a case for efficiency in alternative rock that hasn’t seen much screen time in the past fifteen years." When he’s not at his day job or in his studio he is an adoptive dad, the family cook and a lucid dreamer.