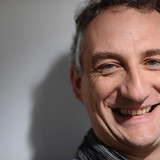 French composer and singer, Jean-Michel has finalised his first album "Chansons intimes" in 2012 . The

EP "Miss You" includes 2 titles . One "love song" , "Des Je t'aime" is very tender. "Miss you" is speaking about attemps in France. "It' been a long time I did not listen to such pretty lyrics about love in modern music." (Noa, Musicinfo China ) Jean-Michel begins piano at 7, has performed his first show-cases at 13. Co-creator of music on the great show "Dream of a Summer Night", he is the pianist and arranger of the famous choir "Les Copains d'Accords" in France The performances and show-cases allow him to be known in East of France (Alsace ) for his energy. With his brother Pierre and his childhood friend Cédric, he has created the band WBBs (Welshes Brothers & Sister Band ) , specialized in Pop-Rock covers. In September 2015, Jean-Michel opened a prestigious school, Yamaha Music School in Colmar. This academy has nearly 200 students after five years . In April 2018 , a huge moment was done with Joniece Jamison, great international voice of Gospel, and the choir Les Copains d'Accords. Jean-Michel is an intimate author, and also a great performer. To discover his universe, please follow this link : www.jeanmichelmusic.fr