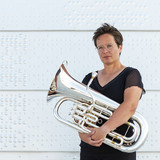 BENTE ILLEVOLD (b. 1983) comes from Rendalen in Østerdalen and plays the euphonium. In recent years, she has distinguished herself as an innovative performer and gained recognition for her performances of new works for the instrument, both nationally and internationally. Bente is passionate about expanding euphonium repertoire and letting the instrument unfold in new constellations and contexts. She has premiered seven major works for the euphonium and is known for untraditional and brave repertoire choices. Bente works as a soloist, freelance musician and educator based in Drammen (Norway). She is an international S.E. Shires Company Euphonium artist and was the company's first female and European euphonium artist. Bente's debut album "The Sound from the Deep Forests" was released in 2020 and was nominated for "Instrumentalistin des Jahres" in OPUS CLASSIC, Germany's largest classical music magazine