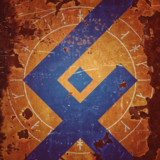 Following the release of the debut EP ‘Trældom’ in 2012 came the debut album ‘Mulm’ in 2015 following ‘Jernbyrd’ from 2018 and finally their latest release 'SOL' from 2020. BERSÆRK have toured extensively in their native Denmark as well as in Norway and Germany. They are known for their intense and energetic live performances and with time they have built a solid and loyal crowd of followers, these days known as “Bersærkere” - ‘Berzerkers’ in English. The press on the latest BERSÆRK album 'SOL' (2020): “SOL has to be one of the very best danish hard rock records in years”. (5/5) - Sven Lokjær /Devilution "I can't imagine that SOL will be topped this year even though 2020 has a strong year of releases. It has desire to tell stories, it takes chances, it's bold, and it's devilishly well performed and melodic. I couldn't wish for more. It's been a while since new music has had such an impact on me." (10/10) - Andreas Nørgaard /Modgift "The production is thus far the best that the band have had on an album and that's important when one of the countries' best bands has made such a complete album. Bersærk is here to stay." (9/10) - Bell Bruun /Metalized "Masterpiece... without doubt Bersærk's best to this day." (5/5) - Mads Pristed /Metal A Day “When I reviewed Afsky's 'Ofte jeg drømmer mig død' back in May I was convinced we had by far seen the best danish album of the year. Now I'm not so sure anymore..." (9/10) - Søren Højer Larsen /Heavymetal.dk