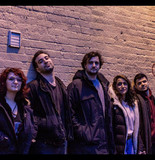 Fresh off recording their first single with Toronto based producer Brian Moncarz, Soulish is gearing up for an eventful year.   Formed in 2019 and based in Toronto Ontario; Soulish, a dynamic female fronted rock band, skillfully blends elements of rock, punk, funk, and hip hop to create a unique sound, drawing musical influence from legacy acts such as “Queens of the Stone Age” and “Bon Iver” among many others.   The band has played shows in Toronto, Hamilton, and most recently Montreal, connecting with the local scenes and gaining valuable experience,which is directed into the crafting of their energetic live show.   The band celebrated the release of their debut single All I Had Known on February 21st to a sold out crowd at the Rivoli in Toronto and is currently working on an EP, and professionally recorded live concert videos.