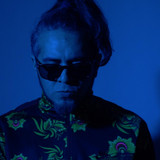 El Hijo de la Cumbia is more than just a musician. He’s also a well-traveled, musical anthropologist. From early days performing Reggae, Dub, and Hip-Hop in his native Buenos Aires to working with influential cumbia sonidero groups in Mexico and the USA, El Hijo de la Cumbia has always sought to learn from the world around him. The Malmo, Sweden-based musician's latest endeavor is a new album that spans a decade of research and is his largest undertaking yet.

“This is, without a doubt, a new beginning for me,” he says. “I spent 10 years traveling the world, learning and absorbing new styles and rhythms. I composed 56 songs, and it took me a year to select my favorite ones for a new album.” That album is Genero Genero, an apt name as El Hijo de la Cumbia deftly combines numerous sounds, styles, and genres to create a sonic version of his heavily-stamped passport. The album features appearances by Celso Piña, La Dame Blanche,