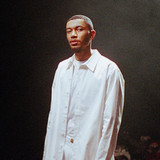 Since emerging last year with his self-produced debut single - the skittering, jazz-flecked Imaginary Friends - 24-year-old rapper-singer and producer Wesley Joseph has written, directed and scored his own short film, Pandomony, as well as directing the video for his undulating second single, Martyrs. While he delegated the animated visuals for glitchy Ghostin’ to Pixar’s former technical director Najeeb Tarazi, the video’s fusion of the hyperreal and the mundane marries purposefully with the intention of his music. "When you look back at life, the romanticised memories are... more poignant than the reality," he told The Face. "But music allows you to relive those moments as over-exaggerated, melodramatic soundbites. And I want to provide those soundbites.” His newest single Patience is out now.