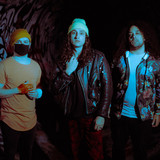 There's something to be said for following your dreams. For Glasslands, that inspirational concept has roots that have grown into a firm footing in the indie rock scene. Singer Josh Kincheloe didn't have to give up his career as a successful sideman. But his knack for catchy, atmospheric rock was bursting at the seams. He started Glasslands in 2013, the project was the musician's first stab at crafting sound around his vision instead of supporting someone else's. Debut album Pariah emerged in 2016. Led by Kincheloe's expansive voice, the collection launches punchy blasts of metalcore into a melodic space often unreached in that genre. Subsequently, it earned praise from rock rags such as Alternative Press and HM Magazine. By that point, former Beartooth member Brandon Mullins had signed on as Glasslands' drummer. Shortly after that, instrumentalist Jordan DiSorbo (Before Their Eyes) became the act's guitarist. Frantic standalone single Misery Game arrived in 2018, followed by a pair of Glasslands' most accessible rockers yet. In 2019, the one-two punch of Mr. Creeps and Silent Prey shook listeners' eardrums, the fresh tunes arriving as the outfit's most dynamic and memorable numbers yet. As if to mirror that sonic ascent, the band’s live shows have become a communal catharsis for all involved. Because if there's one thing Glasslands knows how to do, it's to tell a relatable story and convey deep meaning through song. Now, the music world is ripe for the group's takeover.