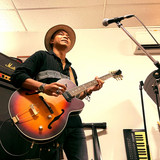 According to Greek mythology, ​the phoenix is a long-lived bird that cyclically regenerates. It symbolises immortality, resurrection and life after death. That myth inspired Mellow Blues to redefine himself after he left the last band he was in. The Singaporean guitarist and singer-songwriter, Mellow Blues’ musical style incorporates elements of Rock, Blues, Reggae, Folk and World music. Mellow Blues performs live as a solo live looping artist and has toured in United Kingdom, Thailand and Vietnam and performed in various venues in Singapore. Endorsed by Emiya Guitars, he has collaborated with them to design his very own “Mellow Blues” archtop guitar series. Prior to going solo, ​Mellow Blues played for Reggae Remedy, Jamie One Drop and UiD. He was one of the backing guitarist in 2014 Suria’s Hari Raya TV show. During his time in Reggae Remedy, he had backed international reggae artist such as Ras Muhamad, Toke, Masia and Denny Frust. The notable highlight during his stint with UiD is that a drama on Suria, a TV channel in Singapore, used their song as the opening theme. He played at Kuala Lumpur's Reggae Festival with Jamie One Drop when he was in the band.