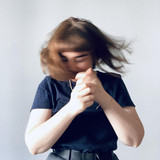 Eclecticism is the keyword when it comes to the musical taste of LUZ1E. Based on her love of harsh drums, weird bleeps and bouncy basslines, she interweaves dark Electro with complex Breaks, Techno and the occasional dreamy bop. Born and raised in Frankfurt she quickly developed a keen interest in electronic music when her brother introduced her to early House music. Inspired by the dance sound of Detroit, Chicago, New York and the UK she translates those diverse sonic influences into her sets and productions, which build a bridge between classic tunes and new sounds combining them into a notion of futuretroism.