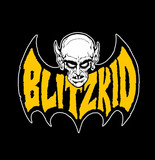 Blitzkid are an American punk band from Bluefield, West Virginia. Blitzkid have been crucial in the development and spread of the style of music known as horror rock, and remain one of its leading exponents. The band is led by singer/bassist- Argyle Goolsby and singer/guitarist- TB Monstrosity. Formed in 1997, Blitzkid have released seven indie and major label studio albums, appeared on numerous compilations and extensively toured both nationally and internationally.