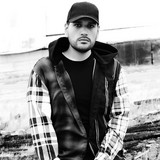 Cryptic Kairos has no problem giving his older brother David all the credit in the universe for why he began pursuing creative expression. “I remember walking home after school and seeing him freestyle with his group of friends from the neighborhood,” CK says, “I would see notebooks of his song lyrics laying around the house.” It didn’t stop there though as David clearly had local buzz behind him with Cryptic hearing people bump and listen to David’s art. David was in the studio making music with producers and getting ready to take that next step. Unfortunately, David’s life would be taken before he was able to be that next artist up for Nevada. This, of course, impacted Cryptic Kairos heavily to where he fell into a deep depression unsure of what this existence had for him. “But I decided to give myself a 2nd chance at life,” CK recalls, “because I wanted to know what the next page of my life would look like...I wanted to have a happy ending.” “I began to be surrounded by music again and met a lot of people who were up and coming rappers, singers, and producers,” the Nevada artist says. “Now I know why my brother loved it, I felt like it was a sign for me.” Inspired to tell his stories and his brother’s Cryptic Kairos grabbed the mic and began to create.

CK is working on his debut EP currently titled “Midnight Melancholy” which drops in 2022, but you can get your first sample of the album in September 2021, with the lead single “Break the Broken.”