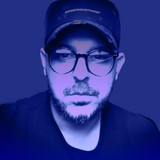 UK-born Music Producer from South London known for his multicultural productions and remixes. Kougan Ray first appeared on the music scene in 2015 when he put together an official remix for popular Turkish artist Buray Since then Kougan has worked on many other remixes for artists around the globe infusing ethnic sounds and feel to his productions. One of many includes remixing for American Lebanese artist Mayssa Karaa with a deep house version of her song Versailles. Being