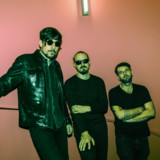 In the year 107 after earth an engineer, an architect and a designer aboard the Voyager 144 decided to make music as it was popular about 5 billion years before, immediately preceding the first climate collapse. It was called Rock. Rock? We now believe, that it was popular - as it is even now - to look back in time for inspiration. To be retro. Maybe they looked back to the then still very close roots of mankind, the stone age. It would explain some of the cruder aspects of this kind of music. They spent a large amount of their time online. It was thought to be unhealthy and some few craved to be out of reach. Silly enough, they didn’t see the obvious coming. That was unhealthy. They ignored the mistakes of the past and even more shared an ignorance for the future and were egoistic. Still they were a happy people and had weird encounters at open air concerts. Dreaming that living in space would be their masterpiece. A Notion unconceivable to a modern human being. But they certainly achieved it. 107 years after giving in to the red giant that was our sun by sling-shooting around the planets of our solar system like an acrobat, we have forgotten what it was to crave the silence in open air spaces. Dreaming of landing on a new planet to call home, scared of crashing down while seeing our own reflections on a natural body of water again after ages. Now the only quiet place we know is outside our spaceship wearing a suit. It is a painful silence out in the monotonous void.