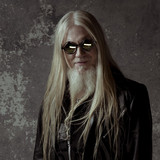 After starting his influential career a few decades ago and selling countless copies of ground-breaking albums along the way, one might wonder what the next logical move is for one of the most gifted, singing heavy metal bassists of our (or all) time? Yes indeed: a solo record. A solo studio album is exactly what Marko Hietala has been working hard at for a very long time. The title? Pyre of the Black Heart! Yet the obvious question remains: why has it taken so damn long? With Marko’s unique kind of exceptional gift for playing, composing, singing and writing, many rock fans might have expected Marko Hietala's own studio recordings many, many moons ago. Well, there has been some obstacles in the way of this – the most monumental of all of them being one certain Finnish musical ensemble named Nightwish. When your band is hands down one of the biggest names in the world of heavy metal, there is plainly very little time for external activities. Enter 2017, which also heralded Nightwish's yearlong sabbatical, following their enormously successful "Endless Forms Most Beautiful (Deluxe Version)" studio album and consequent 18-month long world tour. "When we decided to allow some rest for Nightwish– for the first time in about 20 years – I soon reached the point of realisation: ‘The time has come – I will be spending my year off working like hell... Working around my solo album’”, says Hietala with a smile.