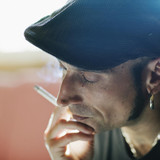 Fito Cabrales, former vocalist for Spanish rockers Los Platero y Tu, left the successful group in 1998 in search of a new sound. Cabrales formed his own group, calling it Fito & Fitipaldis. Striving to synthesize such elements as soul, pop, swing, flamenco, Tex-Mex, and Latin jazz, Cabrales claims that "everything has a place in this emotional, complex-free music." His free-spirited approach to songwriting is easily summarized: "I would like everybody to understand these songs their own way. They are just songs. So much work, so much worrying, so much thinking about them and finally...they are just songs." Signing with DRO Atlantic, Fito & Fitipaldis released their first disc, A Puerta Cerrada (A Closed Door) in 1998, and their second, Los Sueños Locos (The Crazy Dreams) in 2001. The group's 2003 release, Lo Mas Lejos, A Tu Lado (The Farthest from Your Place) achieved great success, reaching number two on the national charts during its first two weeks, and exceeding sales projections considerably. Cabrales and friends toured extensively throughout Spain and elsewhere, playing some of Europe's most important venues. In 2006, Fito & Fitipaldis released their fourth album, Por la Boca Vive el Pez (Fish Live for the Mouth). Outperforming its predecessor, the album hit number one and was eventually certified four-times platinum, making the group among Spain's most popular performing artists. Another three years went by before the group followed with their fifth album, 2009's Antes de que Cuente Diez (Before I Count Ten), but the results were similarly thrilling -- the album hit number one in Spain on its way to four-times platinum certification. The group spent much time touring, but stayed quiet on the recording front. Finally, in March 2014, Fito & Fitipaldis released the live album En Directo Desde el Teatro Arriaga, anticipating the studio set Huyendo Conmigo de Mí later that year. It became the group's third consecutive studio album to hit number one in Spain. ~ Evan C. Gutierrez, Rovi