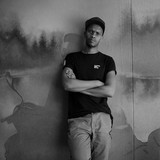 The Gugulethu Native, Siphe Tebeka, is fast becoming a household name in South Africa's nowglobal house music scene. Initially making waves as one half of the duo STAB Virus , it is his own productions that have been a cut above the rest, gaining interest and widespread support from global record labels and artists alike. With performances at international festivals; Tomorrowland, Sonar and Awakenings as well as a string of releases planned for the coming months