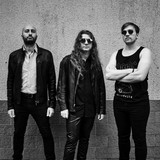 You can say a lot about 1965, but you can’t say they’re a one dimensional band. Although it traces its roots to classic rock and bands like Led Zeppelin or Pearl Jam, it’s difficult to attach any specific label to 1965’s music. The goal of the of the group is to make each of their albums sound different than the previous one.   The band's debut album, titled "High Time" and released in 2015, contained a very diverse material, combining riff- and solo-driven rock of the 70s with the sound of the 90s. After all, the name 1965 is a tribute to alternative rock icon The Afghan Whigs.   After self-releasing their debut album, 1965 had to face the challenges that most young bands struggle with: frequent changes in the line-up and other problems that often result in the band breaking up. But the group survived and, although it took them more than half a decade, returns with another release.   1965’s second album, in line with their philosophy, is different from its predecessor. New release, titled "Panther", is a hard rock soundtrack of a never made scifi movie from the 80s. It's an explosive mix of glam and space rock, where inspirations like Mötley Crüe meet Monster Magnet, Velvet Revolver and Alice In Chains.   Regardless of the reaction their music receives, 1965 will always do their thing: create the music they would like to hear themselves, by their own rules and at their own pace. And have a lot of fun doing it.