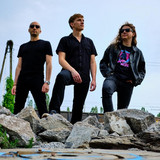 1965's a hard rock band from Warsaw, Poland. Their music mixes classic rock sound with unique vibes coming straight from the band members' souls. While inspired by such legends as Led Zeppelin, Pearl Jam, Guns N' Roses or Foo Fighters, 1965 doesn't shy away from other influences. As they say themselves, they don't seek to start another music revolution, but they don't wanna be derivative either. After all, the group's name was inspired by the album of an alternative rock band, The Afghan Whigs.   1965 was formed in 2013 by singer and guitarist Michał Rogalski with drummer Marcin Krulikowski, bassist Paweł Krulikowski and guitarist Mikołaj Piechocki. Their debut album titled "High Time" was released on February 27, 2015. It consisted of songs written by Rogalski, influenced by 70s hard rock and 90s grunge, combining powerful riffs with subtle ballads.   Unfortunately, 1965's march to fame was soon slowed down by a series of line-up changes. Unlike many other young bands, they survived them. With a new line-up consisting of bassist Marco Caponi, drummer Tomek Rudnicki and Michał Rogalski, they played several dozens of concerts all over Poland and now they are preparing to record their second album, blending the sound of 80s hard rock with heavy stoner riffs and psychedelic space rock landscapes.   A new chapter in the history of 1965 is starting right now. No matter what the future holds, one thing is certain: they're going to enjoy playing rock and roll more with every gig.