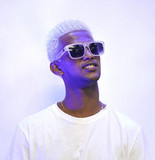 Nadun Anjana Saviour Fernando, also known as Arixx, is a multi-style house DJ hailing from Sri Lanka. Born in Negombo in 1997, he has been passionately involved with the house music scene since 2014. It was love from the start and from that very beginning there was no turning away from the music and vibe that is trance. One year later he bought his first console and with his first attempt mashing up 2 hit records, the magic of music was unlocked. As a DJ, Arixx has become known for his powerful basslines and festival-ready tracks which alternate between hard grooves and crowd jumping pieces. In 2016 he decided to take his love for music to the next level and started producing and He signed with three international labels, Dropped singles on some radios, and got a lot of international supports.