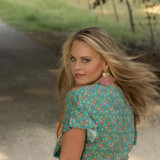 Holly Tucker is emerging on the Texas Country Music scene as one to watch. Her voice has been described by Blake Shelton as “the most effortless, accurate, and powerful voice” the top-charting country music star has ever heard. In June 2013, Holly entered the national music conversation, when she rose to the Top 6 out of 40-thousand people who auditioned on Season 4 of NBC TV’s hit music reality show, The Voice. Holly, on Team Blake Shelton, was one of only seven contestants to receive an impressive “4-chair-turn”. Currently, with her focus on the Texas country music scene, Holly has released three singles from her album, Steel, to Texas Regional Radio. ‘Wax Paper Cups” a duet with Ray Johnston of the Ray Johnston Band, and “You’re In Texas”, which rose to #44 on the TRRR Top 100. Holly's current single, "Dallas on Your Boots", is climbing the Texas charts and promises to be Holly’s most successful radio release to date. Additionally, Holly released the official DOYB music video mid-2017 and it was featured on the Country Rebel Facebook page and Great American Country (GAC). In the last year, Holly has opened for well-loved and respected artists such as Tracy Byrd, Willie Nelson, Neal McCoy, Linda Davis, Clint Black, the Oakridge Boys, Koe Wetzel, Stoney LaRue, Parker McCollum, Ray Johnston, Hudson Moore, and more. She is currently on tour in Texas and the southern region with her band on the Steel Tour.