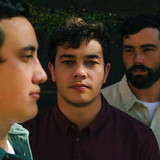 Woodlock’s international profile kicked off with headline tours through the Philippines, China, and Canada off the back of standout single “Something Broke That Day.” Simultaneously, the title track of their Sirens EP reached iTunes Top 50 charts and Top 10 spots on Spotify’s viral charts globally.