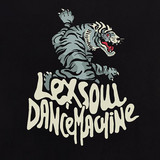 Raw street funk on one side, with sweet soul on the other – Lexsoul Dancemachine is a 6-man groove band known for tearing venues apart with their stage presence. Active since 2013, the aim of the machine is to hypnotize feel-good music lovers with thumping bass lines, syncopated rythms, repetitive grooves and soulful vocals. It’s the kind of music you can break dance to, although in between those hard-hitting sounds you’ll find some more tender grooves. December 2015 saw Lexsoul Dancemachine self-release their debut album "Deus Lex Machina" followed by "Sunny Holiday In Lexico“ in 2017. In the meantime the band has been gigging around Europe, including Positivus, Pori Jazz and Imagina Funk in Spain. Their tracks have also been picked up by Craig Charles Funk and Soul Show on BBC 6 and BBC 2. In 2020 „Lexplosion II“ blasted its way onto the dancefloors, car stereos and boomboxes. The 8-track LP provides fire power for the funk-soul-disco DJ, albeit remaining a pleasure treasure for the leisure listener. The album features collaborators such as the guitar funk icon Cory Wong from US; the Brazilian percussion maestro Luiz Black; and a local dame with staggering licks on the violin – Liis Lutsoja. Per usual Lexsoul Dancemachine crosses genre borders with tunes in soul, disco, boogie and even house modes. "Lexplosion II" brought with it a summer full of celebrations; from the album launch mini-festival in Põhjala Tehas to a 3.5 hours long concert on the roof of a driving bus.