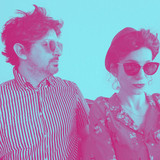 babelfis is an indie/pop duo formed by musicians Sevda Hamzacebi and Cem Dinler. Founded in Istanbul – now based in Berlin, the band pursuits all kinds of stories that they have grown up listening to. Deriving from both western and eastern roots and a scope of other personal influences, the duo focuses on melding all these experiences together through new forms of musical and poetic expressions. In February 2020 they released their first single “Kara Balık” (Black Fish) and a music video which was filmed in Treptower Park, Berlin in June same year. The band will release another song called “Kuyu” (The Well) this December.