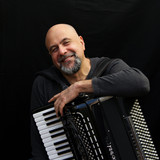 “Toninho brings in his accordion the synthesis of all great Brazilian accordionists and at the same time, is a singular player with his own personality and his unique sound, which practically reinvented the instrument. He is also an excellent composer, at the height of the player.” (Turíbio Santos) Toninho Ferragutti is a musician, composer and arranger that has extensive involvement in shows and CDs of important artists in Brazil and abroad. One of his CDs, Sanfonemas, was nominated for the Latin Grammy in 2001 for the best regional music CD category and his latest solo CD, Nem Sol Nem Lua, was said to be among the 10 best CDs of instrumental music in 2006 by many critics. In addition to his shows with his original work, he is also playing with the Maria Schneider Orchestra (USA), Celine Rudolf (Germany), Maria Bethânia, Mônica Salmaso, Zizi Possi, Gilberto Gil, 202 Trio, Edu Ribeiro, Jovino Santos Neto and others. There weren’t few the musicians who have dedicated themselves to the accordion. Many of them have become virtuosos in the instrument in addition to creating a fundamental repertoire that enriched MPB (Brazilian Popular Music). Toninho is one of such example.

Musician, composer and arranger, he early chose this instrument as an inspiring tool and as a way to build a successful career.