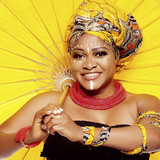 With her inimitable, velvety voice, Nigerian-born via Italy singer, songwriter and actress Sonia Aimy is the quintessential embodiment of contemporary African world music. Her sound blends Afro-jazz, highlife, and call-and-response African griot tradition, in easy flowing, yet virtuosic performances. Sonia Aimy has won fans in Europe, Africa and Canada through her on stage appearances with the likes of African musical legends Hugh Masekela, the Mahotella Queens, Miriam Makeba, IGNAWA and Williams Parker. Fluent in English, Italian and several African tongues, Aimy grew up speaking the local Edo language of her native Benin City in southern Nigeria. Through her music, she also explores Yoruba and Hausa (both from Nigeria); as well as Obamba (Gabon), Wolof (Senegal), Lingala (Congo), Kiswahili (East Africa) and Somali. It has been Aimy’s passion since she started singing at age eleven to touch hearts and souls. From her mother, she gained an early education in the folklore of her people, the Bini, an interest she extended into traditional music, storytelling and dance. Immigrating to Italy, she studied jazz music and interpretation, as well as theatre arts, crafting a sound that has become distinctly her own. Motherhood is an important theme that often appears in her lyrics, along with a deep concern for justice.