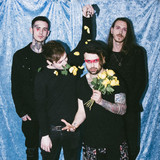 CLARION is an eclectic four piece indie-pop band from Central England providing relatable, and often cynical observations of life in your twenties. Kae Bradbury's sharp and intricate drum beats lay the foundations for catchy mellow guitar riffs and extravagant 80's synths that result in modern yet nostalgic songs that wouldn't feel out of place in the credits of "The Breakfast Club". Their debut EP 'On Tick' has been described as "The Midlands answer to The 1975" with upcoming EP 'Loanin Serotonin' compared to the likes of Jamie T and RATBOY. Propelled by frontman Jay Adam's trashy but soothing vocals, combined with bodacious double edged lyrics, their songs demand a second listen.